Go To Most Recent >>

Scripture and a reading from Luther's sermons and devotional writings 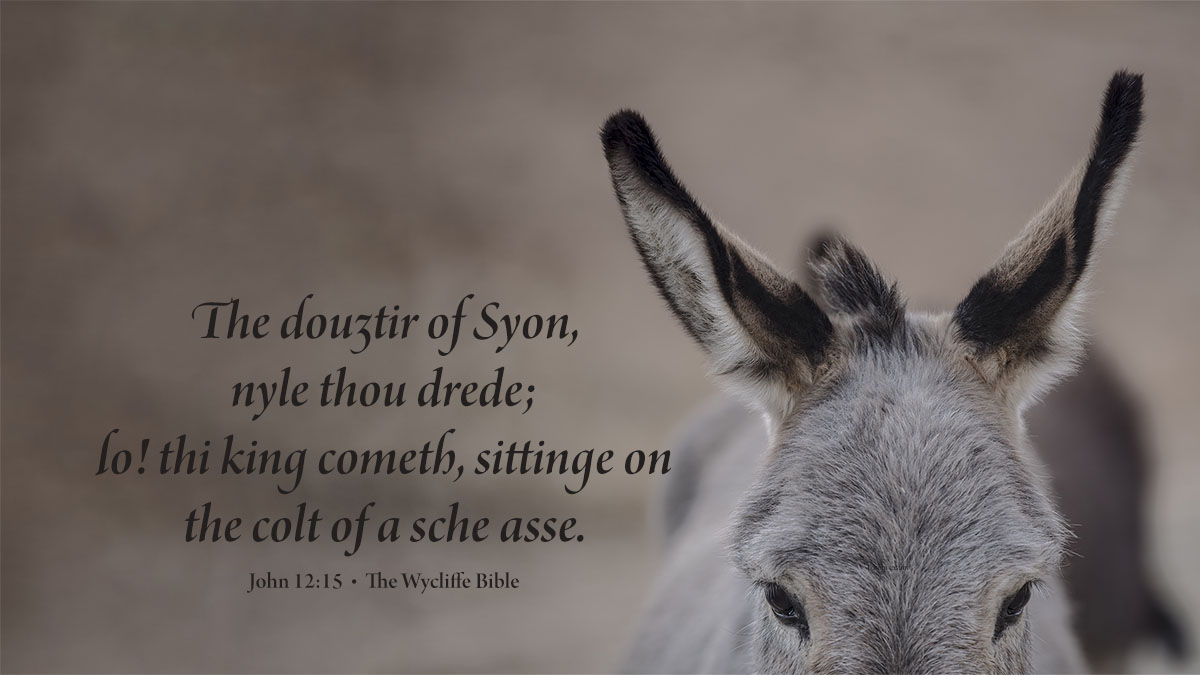 12 The next day a great crowd who had come to the feast heard that Jesus was coming to Jerusalem. 13 So they took branches of palm trees and went out to meet him, crying, “Hosanna! Blessed is he who comes in the name of the Lord, even the King of Israel!” 14 And Jesus found a young ass and sat upon it; as it is written, 15 “Fear not, daughter of Zion; behold, your king is coming, sitting on an ass’s colt!”

We will direct our attention to the reason why the evangelist quotes the words of the prophet, in which was described long ago and in clear, beautiful and wonderful words, the bodily public entrance and advent of our Lord Jesus Christ to the people of Zion or Jerusalem. The prophet wanted to show to his people and to all the world, who the Messiah is and in what manner he would come and manifest himself. He thereby anticipates the mistaken idea of the Jews, who thought that, because there were such glorious things said and written of Christ and his kingdom, he would manifest himself in great worldly pomp and glory, as a king against their enemies, especially the Roman empire, to the power of which they were subject, and that he would overthrow its power and might, and in its place set up the Jews as lords and princes. Thus they expected nothing in the promised Christ but a worldly kingdom and deliverance from bodily captivity. They were led to this notion, and strengthened in it, by their false priests, preachers and doctors, who perverted the Scriptures concerning Christ and interpreted them according to their own worldly understanding as referring to bodily, worldly things, because they would fain be great earthly lords.

But the dear prophets plainly foretold that we should not think of such an earthly kingdom, nor of bodily salvation, but give attention to the promise of a spiritual kingdom and of a redemption from the pernicious fall of mankind in paradise. This is a different salvation from that of bodily freedom, power and glory, the end of which is death.

The evangelist therefore quotes this saying of the prophet to punish the blindness and false notions of those who seek bodily and temporal blessings in Christ and his gospel, and to convince them by the testimony of the prophet, who shows clearly what kind of a king Christ was and what they should seek in him, in that he calls him just and having salvation and adds this sign of his coming by which they are to know him: “He cometh to thee, meek, and riding upon a colt, the foal of an ass.” This verse takes away all support for excuse, if they do not receive Christ, and it cuts off all hope and expectation for another. It distinctly announces that he would come on this wise and he has fulfilled everything.

Luther, Martin, and John Sander. Devotional Readings from Luther’s Works for Every Day of the Year. Augustana Book Concern, 1915, pp. 426–27.

Rev. Mark E. Ryman serves as Pastor for St. Paul’s Lutheran Church in Salisbury, NC. Previously, Pastor Ryman has served other congregations in North Carolina and Ohio, as well as a call to specialized ministry with Sola Publishing.